Three diseases all goats owners should be aware of, test for, and work to prevent

Caprine arthritis encephalitis (CAE), Caseous Lymphadenitis (CL), and Paratuberculosis (Johne’s disease) are diseases that cause weight loss, decreased production and various clinical symptoms in your herd. They can result in a significant economic loss to goat producers as well as emotional stress to the pet owner. Furthermore, the risk of human infections with CL and Johne’s is a significant factor in today’s environment of homesteaders who do not pasteurize their goats milk.

All three of these diseases can progress very slowly with few or no symptoms until the animal is suddenly very ill. There is no effective treatment for any of these diseases. All three of these diseases are spread through the milk from affected does to their kids or to any other goats that may come in contact with the milk. Additionally, the diseases can be spread from adult to adult by direct contact.
Cae
Caprine arthritis encephalitis is a viral disease. The organism is shed in the body fluids of infected animals such as milk, colostrums, birth fluids, nasal droplets, etc. The virus lives in the goat’s white blood cells, so anything that has white blood cells can spread the disease. (One of the most common methods that I see is the reuse of needles. Injecting an infected goat with a drug and then reusing the needle on another goat can spread this disease!) This virus does not live very long outside of the environment so if you spill infected non-pasteurized milk on the ground, keep the other goats away from it for a while and then don’t worry about it. The number of animals with this disease that show symptoms is usually low, about 35%, but this number will increase with stress and poor management.

CAE can cause an arthritis that affects multiple joints, pneumonia, mastitis and occasionally a paralysis of 2-6 month old kids. The typical CAE mastitis affects both sides and the mammary glands become hard but not lumpy like typical bacterial mastitis.

At 8 months of age this does knees looked “normal”, and she won GCH and Best junior doe in show.  2 weeks later they started rapidly enlarging, and were painful.  The good knee is double normal size and the bad knee triple normal size.  The knees are painful to the touch, and warm to the touch.   She is now 10 months old and beginning to loose weight despite not being anemic.  This does mother tested negative for CAE for 2 years in a row before testing positive this year.

Paratuberculosis is caused by a mycobacterium species. This organism can survive for over a year in manure contaminated environments. Kids can get the disease from nursing dams with contaminated manure on their udders, or they can get it from an infected dam through the milk or even in the uterus. Adult goats can get it from contact with infected feces or body fluids such as milk or birth fluids. The time between initial infection and symptoms can be extremely long but the goats can shed the organism in their stool very soon after being infected. Only a few animals will ever show signs of the disease, but all infected animals will shed the organism. Many animals will appear very healthy but test positive and shed the disease. Unfortunately, the test is not 100% sensitive only about 50-88% of infected animals will test positive. Some animals will test negative, yet still be shedding the organism.

Clinical signs generally don’t occur until the animal is 2-4 years of age. The animals have progressive weight loss leading to emaciation even though they initially appear to eat well. The affected goats are weak, anemic, have rough hair coats, and poor skin condition. Although cattle with Johne’s develop diarrhea, we don’t see that in our goats. In the final stages of the disease before death we may see anorexia, and clumping of stool. Usually goats die within 6-12 weeks of first showing signs. 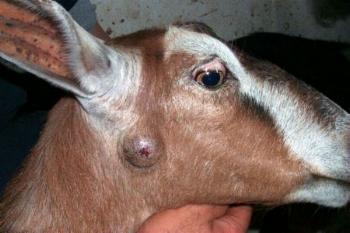 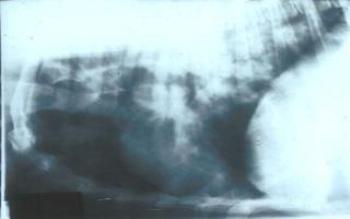 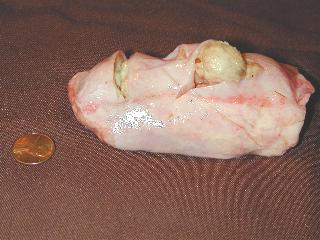 Caseous Lymphadenitis is a contagious bacteria like disease.  It occurs in both sheep and goats.  The organism enters goats through cuts in the skin or mucous membranes such as the mouth.  It causes abscesses of the lymph nodes  that appear to have a thick yellow to green toothpaste like material in them.  These abscesses can occur in the lymph nodes just under the skin or they can occur internally in the organs such as the liver, udder, or lungs.  Once the goat becomes infected they continue to have repeated abscesses for life. If you sell the goat for meat, there will be a downgrading of the carcass if there are abscesses.   Abscess that rupture will contaminate the environment. The organisms are very difficult to kill and will be able to infect goats for years.  Internal abscesses  can cause chronic weight loss, exercise intolerance, difficult breathing, chronic cough or sudden death.

Once the environment has been contaminated, everything that has come in contact with the material should be burned.  Using Clorox bleach solutions on fence rails etc, may decrease the chance of contamination.    Vaccination is available, the vaccine will cause severe abscesses to form if it is given to goats that are already infected with the organism.  The vaccine will not prevent the disease in uninfected animals but it will decrease the number and size of the abscesses as well as the overall numbers of animals that abscess.

Ways to prevent the spread of these disease

1) All kids must be taken off of their moms at birth and fed heat treated colostrums (heated between 133 and 138 degrees F (56-59 degrees C) for 1 hour in water bath; then aliquot and freeze. Do not exceed recommended temperature.  (Temperatures above 140 degrees F denature antibodies.)

2)  After initial colostrum give only pasteurized milk.

3)  The kids must be kept in an environment that has not ever had infected animals in it (CL and Johne’s)and they should never be introduced to the infected herd. (with all three diseases).

4)  Buy new goats from herds that have tested and are negative for these  diseases.  Test and quarantine these newcomers.  If this is not done, once in the herd, these diseases are extremely difficult to get rid of.

5)  Start a test and cull program.  Remember that no test will detect 100% of the infected but non symptomatic animals.